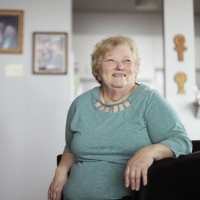 Work as a tool and die maker was well paying, but intermittent, for her husband, Doug. For Pennie, there was a series of contracts in social welfare, including running subisidized housing. Neither spouse was in a job that had a private pension. Still, they were delighted to discover they could easily afford to buy a home, take summer camping trips with their son and daughter, and even enjoy the odd vacation in Florida. Now 74, Pennie looks back and sees a good life — one where if you worked hard, you could count on a decent income.

“It wasn’t always stable, but we always had hope we could find something else. And when money came in, you could pay stuff off,” said Pennie. Today, she lives in a clean, bright apartment in the east end of Toronto. She’s not wealthy, she says, but she doesn’t want for anything. She’s comfortable.

It’s a life she worries her children’s generation might not be able to achieve. And new data shows she’s probably right. According to a study being released Monday by the United Way of Greater Toronto, seniors — once the lowest rung on the income ladder — have caught up with and then surpassed young adults over the past few decades. The study, titled “Rebalancing the Opportunity Equation” — to which the Star was given exclusive advance access — found that between 1980 and 2015, seniors in Toronto saw their average annual income surge by 54 per cent, from $32,000 to $49,400. At the same time, young adults, ages 25 to 34, saw their incomes stagnate and fall — from $42,300 to $41,800. People in middle age — defined by the study as being 35 to 64 — remained at the top of the income pile.

“For seniors, there has been a clear and signficant shift away from the bottom … this analysis shows that young adults have become relatively poorer over time, while the economic prospects for seniors have improved,” the report notes.

“My dad was a cop, then worked for Hydro. My mother was a teacher. When they retired, they both had half-decent pensions. People of my stepkids’ generation just don’t have the same opportunities,” said report author Michelynn Lafleche in an interview.